The participants of the Blue vs Green shoot hosted by the Skyline X youth shotgun shooting team stand for a photo following their competition, Saturday, January 19, 2019. The event hosted 37 athletes, 27 police officers and first responders, and Veterans.

SPANISH FORK, UT - The Skyline X youth shotgun shooting team took on several of the areas police, first responders and Veterans over the weekend, claiming victory with an average score of 88 to the officers score of 85.

Skyline X, based out of Spanish Fork Gun Club in Spanish Fork, Utah, currently boasts 53 members ranging from 8 years old to 18 years old. The team is part of the statewide organization, the Utah Scholastic Clay Target Program.  This is a non-profit organization dedicated to educating youth in Utah about firearm safety and promoting youth shooting sports on a competitive and scholastic level.  Their goal is to develop self-confidence, self-esteem, self-reliance, respect, personal discipline, responsibility, citizenship, teamwork, and sportsmanship through regular practice and competition at local, state, and national events.

The Spanish Fork team is definitely living up to its goals. It is also clear that the kids on this team who are competing with one another, are also friends both on and off of the field. Many of them hang out when they aren’t on the field shooting. Nadine White is the mother of two student athletes on the team. “The one thing I personally love about this team,” Nadine said, “is these kids are from all over Utah county and they've made lasting relationships with kids they never would have met if it wasn't for Skyline X.”

Saturday’s event has been in the making since July. During the Spanish Fork Fiesta Days parade on July 24, 2018, which the team was taking part in, one of the team’s young athletes, Brighton K., challenged one of the police officers conducting traffic control to a shootout. The officer asked when and where, and promised to respond to the challenge.

When asked why he challenged the police to a shoot, Brighton responded, “I look up to the officers and want to be like them. I also thought I could shoot better than my D.A.R.E. officer, Officer Dewitt.”

“It was great seeing the interaction with the kids and the police!” Nadine White, parent of two student athletes on Skyline X. “They had fun and enjoyed the shoot. The kids were so proud that they were helping a fallen officer’s family and had such a fun time doing it.”

The Skyline X shotgun team is led by Head Coach, Jenny McGowan. “The Blue vs Green shoot was such a success!” said McGowan. “It was a lot of fun watching the kids interact with the officers from the surrounding police department and also those serving in the military. There was quite a bit of trash talking and joking, I am pretty sure there are some cops and kids who owe a few milk shakes and hamburgers!

Wyatt W and Bradley P of the Skyline X youth shotgun shooting team hold their trophy high after defeating local police in their Blue vs Green competition on Saturday, January 19, 2019. 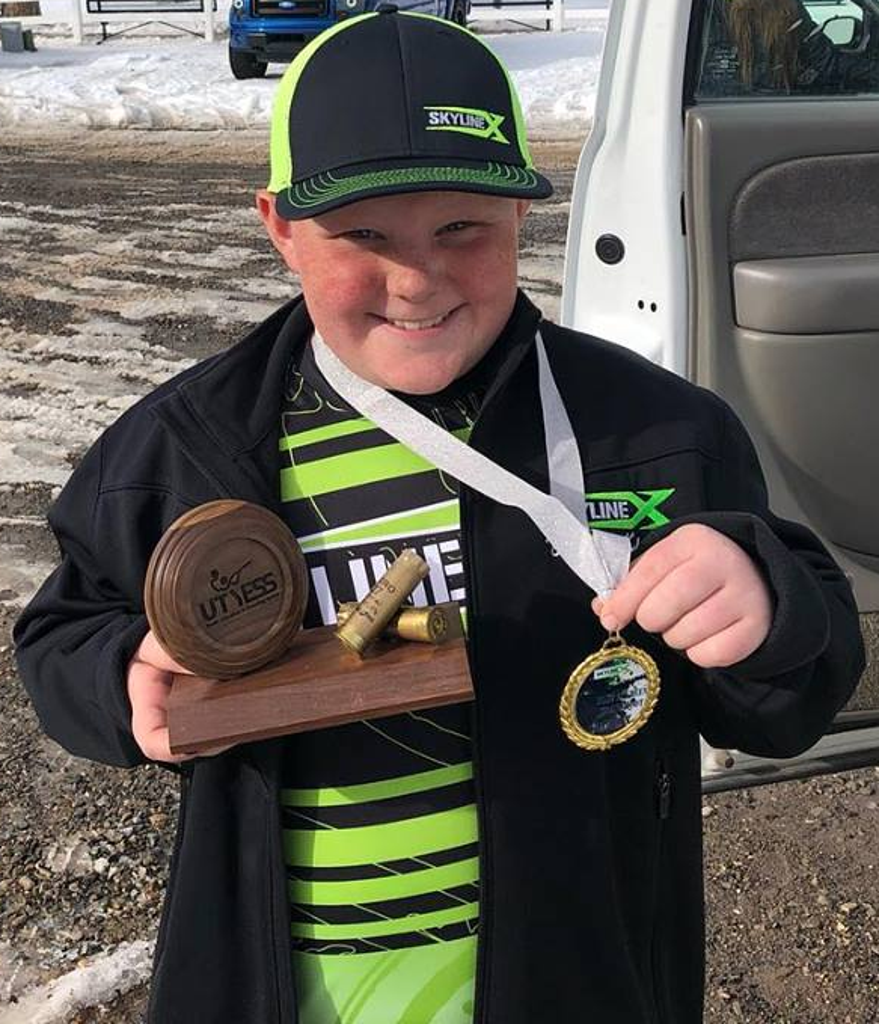 Brighton shows off his awards following the Skyline X Blue vs Green shoot, Saturday, January 19, 2019. Brighton won C class second place shooter. Brighton also received an award for his bravery in challenging the police to shoot with his shotgun team.

I am glad that friendships were made and our team got to be a part of supporting a good cause. We hope our donation can help the wife and son of Officer Shinners.”

If you would also like to help the family of Officer Shinners, the Utah Fraternal Order of Police is still accepting donations through their website at www.utahstatefop.com.

The trophy will be on display in the Spanish Fork Gun Club clubhouse for one year, when Skyline X will challenge the officers for a chance to win it back.

For questions on this event or the Skyline X youth shooting team, contact the head coach: